The Middle East may not be the most obvious destination for alpine sports, but the unique topography of Lebanon actually makes it ideal for a wide range of snow activities. Today, it boasts six different stellar ski destinations spread across the country.

Skiing was first introduced to Lebanon in 1913 by Ramez Ghazzoui, an engineer, who had returned from his studies in Switzerland, and spread the ski concept to his friends in the mountains near Aley. A few years later, Le Club Libanais, the first ski club was established, along with the first ski school, Le Grand Cedre at the Cedars of God in Bsharre. In 1948, Lebanon even competed for the first time at the Winter Olympics in St. Moritz, Switzerland.

Lebanon’s extended mountain range rises above the country’s narrow coast, which means the ski destinations are relatively close to the sea. Therefore, reaching most snowy slopes from Beirut is very convenient. In fact, you may have heard the cliché: In Lebanon you can ski in the morning and take a dip in the sea by the afternoon. Perhaps not for everyone, but it is doable! 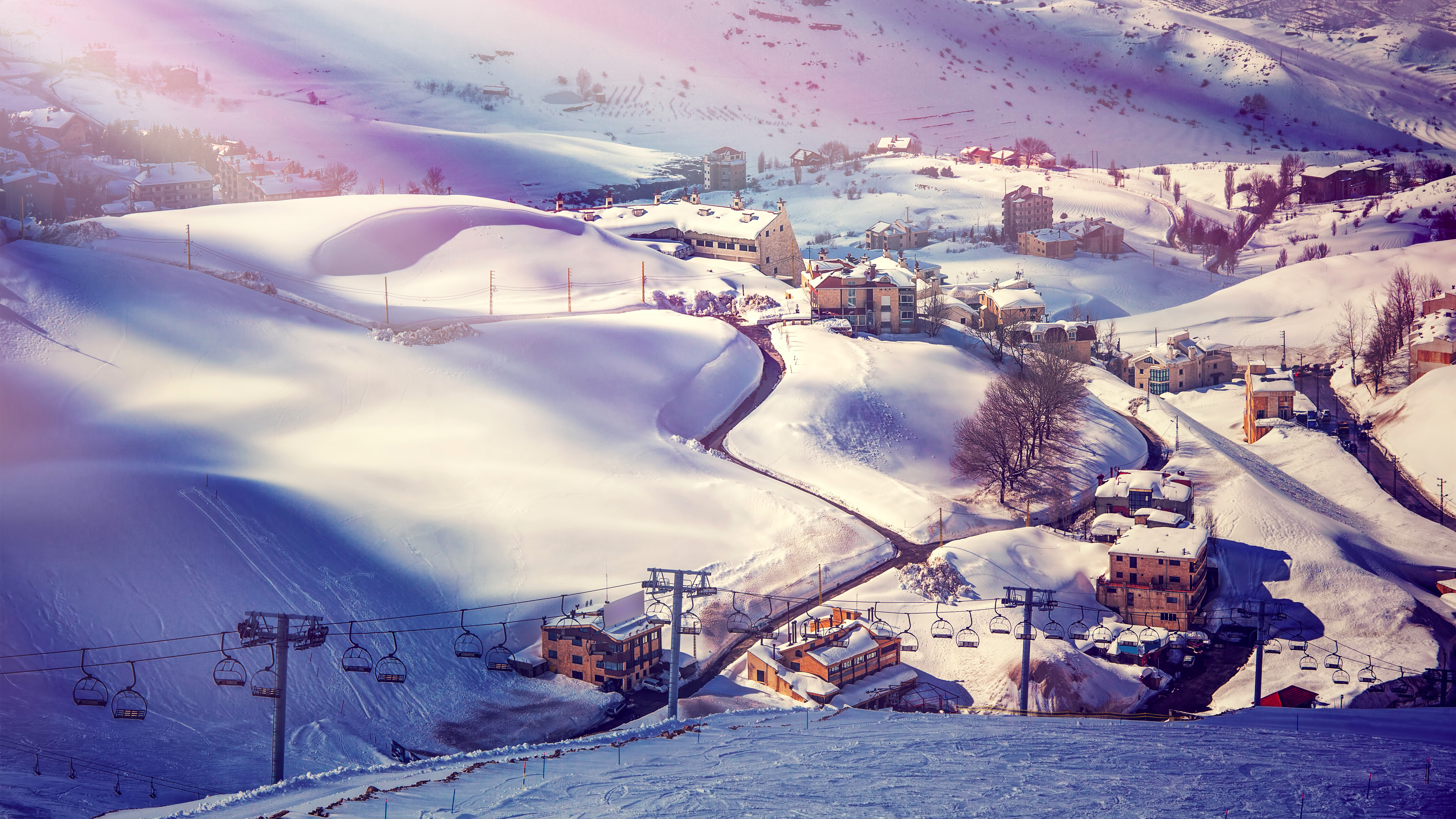 Alia was raised in Japan and lived in five countries before returning to Lebanon a decade ago. She dabbled in TV, advertising, sales and more recently corporate communications, before realizing that writing was her true calling once she settled in her homeland. When not travelling and being distracted by social media or her three loving children, she enjoys researching and writing about her country’s hidden treasures, its thriving arts scene and the Lebanese changemakers with awe-inspiring initiatives.

While the snow season can vary from year to year in Lebanon, it generally starts from mid-December to early April. Let’s look at the different alpine locations where skiing, snowboarding, snowmobiling and snowshoeing can all be enjoyed by adventure seekers.

Considering the reasonable commuting time to the ski resorts, you may want to stay in Beirut and indulge in the capital’s superb restaurants, effervescent nightlife and countless cultural activities. And if you choose Beirut, we have some stunning characteristic guesthouses with elegant traditional Levantine features and modern facilities to make your visit memorable.

Previously referred to as Faraya Mzaar, this is the country’s largest and most popular ski destination. It has 42 slopes and 80 kilometers of ski tracks. It is also the closest ski destination to Beirut, being 45 kilometers away. Mzaar has great infrastructure and facilities with plenty of accommodation for those who plan to spend the night. The area has six hotels, countless chalets and over two dozen restaurants, which means no shortage of après-ski options to keep visitors entertained.

Located in the North of Lebanon it can take two hours to reach from Beirut (distance of 115 kilometers). The advantage of Cedars is that the ski season is slightly longer than the others, sometimes starting early November and lasting until late April. The oldest ski destination in Lebanon, Cedars has the highest range with gorgeous nature and splendid views all around, making it ideal for cross-country skiing. It’s also a superb place for beginners offering several lifts on gentle slopes.

This area, known for great camping sites and off-road driving with ATVs, is 60 kilometers from Beirut and only 30 kilometers from the city of Byblos (Jbeil). Laqlouk is a popular ski destination for families, especially those with small children as the beginners’ slopes are gentle for first-timers with plenty of instructors accessible via the main equipment hire shop. Laqlouk is also great for cross country skiing where skiers can enjoy breathtaking alpine scenery as they navigate the white terrain.

If you plan to stay in nearby Byblos, a charming seaside town with a stunning historic port, we recommend you stay at Beit Faris wa Lucia or Zita Fidar.

You may also be interested in staying at one of our guest houses, Beit Trad, in a peaceful location outside of Beirut. This way you can save time on traffic (which can get heavy on peak days) leading to Mzaar Kfardebian, nearby Faqra and also Laqlouk.

Historically, Lebanon is synonymous with snow; even its name derives from the ancient Semitic word for white, ‘laban’.

This location is 47 kilometers from Beirut and a short drive from the beautiful town and traditional summer resort of Baskinta. This destination is ideal if you prefer a quiet and intimate ski resort without the big crowds. It is also known for having very good quality snow and open slopes attracting skiers of all levels. The adjacent old village of Qanat Bakish is worth visiting too, as it is known for being one of the best-preserved towns in Lebanon.

This is a private ski resort known as Faqra Club which is 45 kilometers from Beirut. It has a variety of slopes catering to all levels. After a long day of skiing, curious travelers can explore the nearby impressive ancient Faqra Roman Temple (the most extensive Roman ruins in all Lebanon) for some sightseeing. During bad snow conditions in Faqra, skiers generally move to ski on the nearby popular Mzaar slopes, since they are on higher altitudes.

We provide transportation to Lebanon’s ski resorts from any location, including Beirut airport. Kindly contact us and we would be happy to accommodate your travel needs.

Like Faqra, Zaarour is also a private resort. It has 20 kilometers of slopes served by six lifts, that have been recently refurbished. The ski resort, which has exceptional snow quality, caters for all levels and offers a four-kilometer trail for cross-country skiers. From its snowy peaks, skiers can enjoy sweeping views of the scenic Sannine Mountain. Zarour is 54 kilometers from Beirut and is only thirty minutes away from the ski village of Qanat Bakish by car.

Alia was raised in Japan and lived in five countries before returning to Lebanon a decade ago. She dabbled in TV, advertising, sales and more recently corporate communications, before realizing that writing was her true calling once she settled in her homeland. When not travelling and being distracted by social media or her three loving children, she enjoys researching and writing about her country’s hidden treasures, its thriving arts scene and the Lebanese changemakers with awe-inspiring initiatives.