Travel guide to Beiteddine, Deir El Qamar and the Chouf · L’Hôte Libanais
Back

Majestic Palaces & Where to Find Them

Journey to the historical home of Lebanon’s Emirs

Nestled in lush green valleys and peaks, less than an hour’s drive from Lebanon’s modern-day capital, Deir El Qamar has long been recognised for its heritage, beauty, and history as Ottoman Lebanon’s provincial capital. But few have ventured beyond its winding roads to explore the hidden villages and forests that rise up to the heights of Mount Lebanon’s southern ridges. The two-day itinerary below takes you on an adventure through the villages, rivers, caves and forests of the Chouf Mountains. Away we go!

Start your adventure from Beirut by heading southbound on the main highway. Take the exit after Damour and follow the signs towards Deir El Qamar and Beiteddine. A few minutes up the mountain are enough to forget the city, as the valleys of the Chouf unfold to your right. The first stop is Deir El Qamar, the historic capital of Mount Lebanon, and the seat of Emir Fakhreddine II, Lebanon’s most beloved prince. The small village today has managed to retain its authentic character and is one of the few surviving Lebanese villages organized around a “midane”, the main square.

A morning in Deir El Qamar can be easily spent walking up and down the old staircases that line the historic streets, visiting old churches, and exploring exquisite palaces and courts, especially the beautiful structures dotted in the midane. Delicately renovated and preserved, today they are home to various institutions and mostly open to the public. At the southern edge of the square stands the 14th-century Fakhreddine mosque, the oldest mosque in Mount Lebanon. To the left of the mosque, you can find the old Barracks, currently the French Cultural Centre, which boasts a lovely courtyard. From the courtyard’s arched window you can observe the midane and the newly renovated Seraglio of Emir Youssef Maan, the seat of the municipality. Around the midane you can also visit the Silk Khan, the Palace of Emir Ahmad Chehab (owned by the Baz family), and the Palace of Fakhreddine II, which today holds the Baz Wax Museum.

After lunch, discover the palaces of Emir Bachir, in Beiteddine, and Mir Amin (his son), which is today a luxury hotel. Drive back to Deir El Qamar through the village of Baaqline, the birthplace of Fakhreddine II and former capital of the Maan Emirs. There you can drive down to the bottom of the valley and visit the beautiful waterfalls of Nabeh Merched – you will need to go through one of the many valley restaurants/resorts to see the waterfalls.

Spend the final hours of the day enjoying the cool mountain air as you admire the starry sky on your quiet terrace at Dar Linda, La Maison du Bonheur or Bouyouti – L’Hôte Libanais’s family members in the region – and get ready to uncover Chouf’s natural sites the following day.

The historic capital of Mount Lebanon has managed to retain its authentic character and is one of the few surviving Lebanese villages organized around a “midane”, the main square.

Begin your day early with a delicious homemade breakfast, and head up the mountain road towards Barouk. There are two ways to get there from Deir El Qamar; the traditional way passes through Beiteddine and the crowded town of Boqaata; the more scenic road goes through Kfarnabrakh and Barouk-Freidis via a small road to the right once you reach the village of Barouk. Your destination is the Maaser El Chouf Cedar Forest, one of the three forests that form the Cedars of the Chouf Reserve. (Ask someone in Barouk to point you to Maasser if you lose your way.) After a little patch of unpaved road, you will find yourself driving along winding lanes across fields of wheat, olive groves and junipers.

The road meanders through different landscapes, low hills, wide plains, and finally the valleys overlooking the lower Chouf. Continue a little further and you will enter the village of Maasser El Chouf, a quiet, secluded village where you’ll find traditional architecture and the gateway to the oldest cedar forest in Lebanon. Driving past the village square to the right, you will now begin to ascend the mountain, the Chouf valley extending farther and farther below you, and soon you will begin to see the young newly-planted cedars surrounding the reserve. One more turn and the large canopy of one of the oldest cedars in the country will appear, signaling the entrance of the forest.

As you enter the forest, you can follow the marked paths and trails. Take the trail that leads to the tree of Lamartine, named after the 18th-century French poet who visited Lebanon in the early 1800s and fell in love with its landscape. On your way, you can also see Lebanon’s oldest cedar tree, which is believed to be around 3,000 years old. 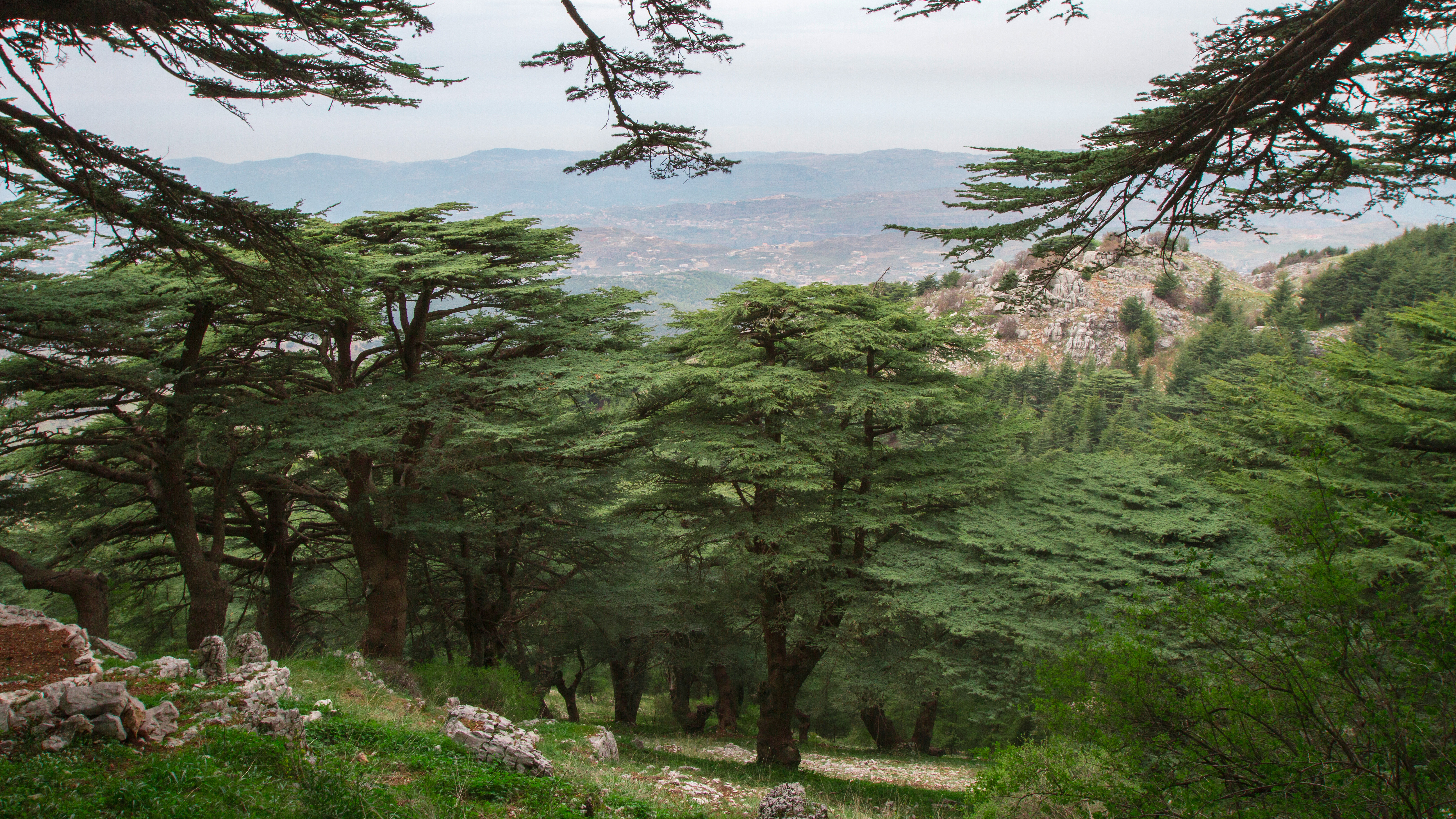 Once at the site of the Lamartine Cedar, you can stop and admire the sweeping view of the Chouf below, or sit and rest under the shade of the ancient tree.

A glimpse of the Beqaa valley

After your hike, continue driving along the mountain road. Very soon you will arrive at the highest point of the ridge and begin your descent on the other side of the mountain towards the Bekaa. A few minutes later, the plain comes into view, dominated by the magnificent Lake Qaraoun to the south and the colorful patchwork of agricultural fields extending infinitely to the north. Stop here to take in the breathtaking scenery.

Driving down the road to the Bekaa you will soon arrive in Kefraya, where you can stop to visit some wineries or continue towards Ammiq and Chtaura.

To return to Beirut, you can drive through Chtaura taking the Beirut-Damascus highway. Alternatively, follow the mountain road through Maasser El Chouf, Barouk, Ain Dara and Sawfar, and complete your exploration of the Chouf Cedar reserve with visits to the forests of Ain Zahlta or Barouk along the way.