A Visitor’s Guide to Algiers

“Come with me to the Casbah, we'll make beautiful music together.” Although this line was never actually uttered in the 1938 classic film noir Algiers, it led a life of its own and perfectly captures the aesthetically pleasing, romantic quarter of this highly charismatic North African city.

Known as “Algers La Blanche” [The White Lady] for its brilliant light, the majestic façade of its glistening white buildings rising up from the sea and the color of the seagulls’ bellies that saluted sailors when they approached the city, Algeria’s capital never fails to make an impression.

From the Parisian flair which characterizes some of its neighborhoods to the dizzyingly diverse architecture due to its tempestuous past, some would say Algeria’s capital has been overwhelmingly and tragically overlooked.

Despite the fact that the city is perfectly safe for tourists and caters to what any traveler could possibly dream of, from astounding architecture to comforting cuisine and everything in between, this massive metropole can still be considered a hidden gem. But that’s precisely its appeal.

This multi-layered city welcomes you to discover the thrilling contrast between its unique aesthetic and sometimes dizzyingly bustling chaos.

From being discovered, as the legend goes, by twenty companions of Hercules, through its foundation as a trading post by the Phoenicians in the 6th century B.C. [known to the Romans as Icosium] to being seized by Ottoman Turk Barbarossa and ultimately colonized by the French which led to a crushing uprising, the history of Algiers is as fascinating as it is brutal. Remnants of its turbulent history are still everywhere to be found in the city, from the mosaic of its deliciously dynamic architecture to its unique multi-ethnic cuisine.

Farah was born and raised in The Netherlands to a Lebanese father and an Italian mother. Having become formally fluent in film in Bologna, she majored in Media & Cultural studies at the University of Amsterdam. After honing her skills as a journalist at The Daily Star Lebanon, Dutch radio and Belgian television, her friends and family bullied her into pursuing a career as a modern-day hakawati-cum-writer. As a freelance journalist, she seeks to illuminate the myriad tiny stories that make up the fabric of society. Farah enjoys learning about Lebanese culture through Seinfeldesque taxi drivers, being told off in French by immaculately dressed tetas and drowning in the comforting cacophony of colours, sounds and scents that is Beirut.

What to do in Algiers?

The capital and largest city in Algeria, Algiers is a cosmopolitan city that sits in a bay along the Mediterranean coastline. Blessed with a Mediterranean climate, it offers a vast array of cultural and culinary attractions, marvelous sightseeing on foot and a unique offering of architectural gems, with many visitors being particularly enchanted by the heartwarming hospitality of the locals. 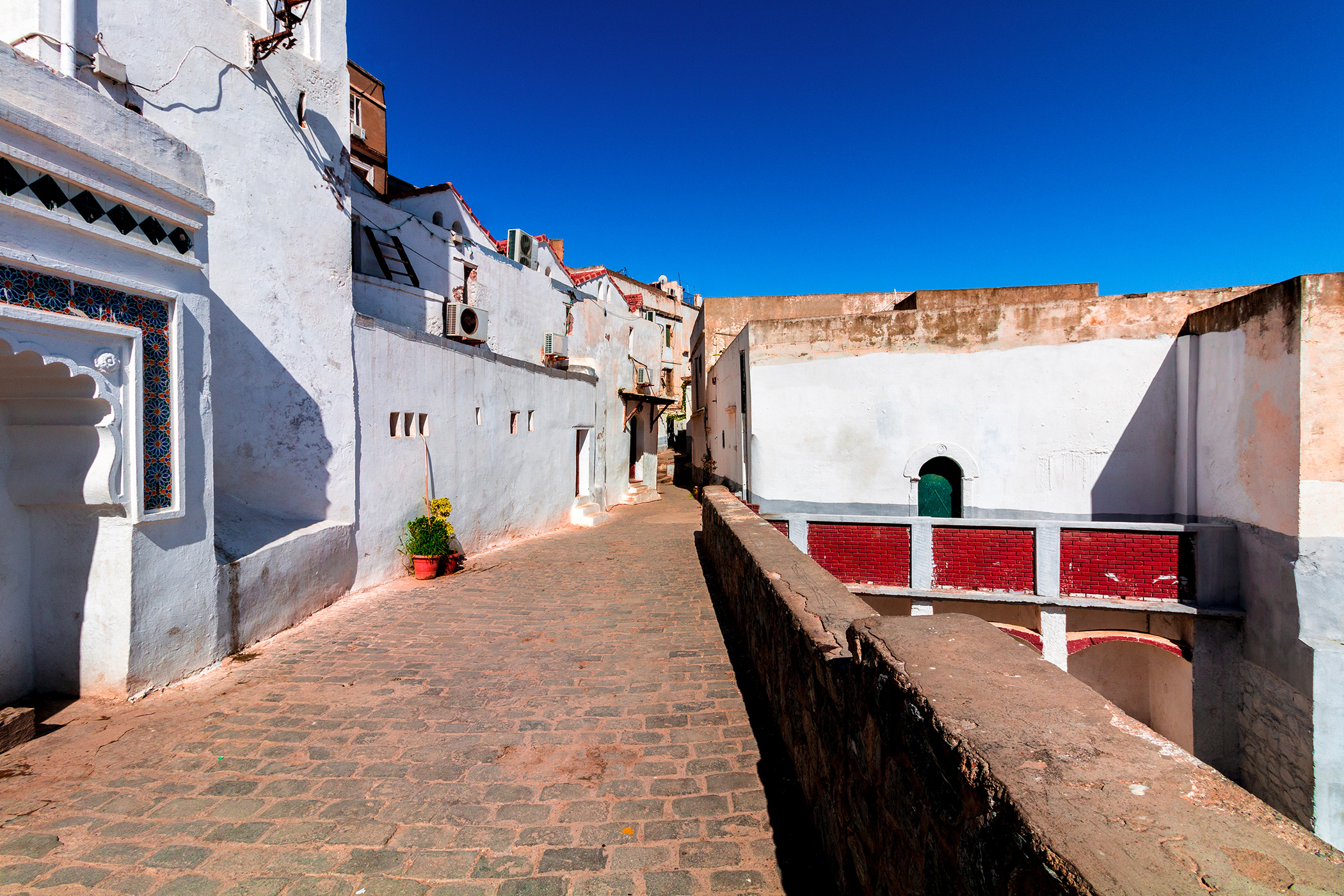 Be captivated by the Casbah

Widely known as the Casbah [Arabic for ‘fortified place’], this ancient part of the city, whose anonymous alleys served as a refuge to pirates and freedom fighters throughout history, is built on a hill overlooking modern Algiers.

Part of this captivating citadel, which is made up of meandering narrow streets and hidden courtyards, dates all the way back to Phoenician times, the 6th century B.C. Since then, the Casbah has been destroyed—and resurrected— by many hands, most famously by the Ottoman Barbarossa brothers who, in the 16th century, turned a then-walled Berber city into a veritable phoenix of North African architecture: city planners built a hundred fountains, fifty hammams, thirteen massive mosques and over a hundred prayer halls.

Where to stay in Algiers?

Offering spectacular panoramic views, the lusciously labyrinthian Casbah is a UNESCO World Heritage site due to its exceptional architecture, which includes the Ketchaoua mosque, Mosque el Djedid [the new mosque] and Mosque El Kébir [the big mosque]. It also houses the Casbah Palace, or Dar Aziza, which was built in 1791 and named after the Princess Aziza Bent ed-Dey. It is a beautiful, white palace with a courtyard, a plethora of terraces and a magnificent grand staircase.

For all its breathtaking bravado, impressive ruins and comforting cuisine, it’s undeniably the Algerians themselves, who welcome visitors with such openness and genuine curiosity, that are the real highlight of a visit to this city

This magnificent Catholic basilica was built in 1872 and is a stunning example of the striking Neo-Byzantine style that characterized the era’s French Algeria. Notre-Dame d’Afrique is perched on a hilltop on the eastern side of the city, overlooking the bay of Algiers. It’s often viewed as the mirror of the Notre-Dame de la Garde, located in Marseille across the Mediterranean.

Stroll around the most authentic parts of Algiers

Once considered the neighborhood for the poverty-stricken pied-noirs, Bab El Oued has transformed into one of the city’s most beloved areas. Spending an afternoon wandering around this area, which sits along the coast in the city center, is the perfect way to ignore the tourist traps and explore a more authentic and intimate part of the city.

Similarly, Didouche Mourad Street is one of Algiers’ main shopping strips. Situated in the center of the city, it is a vibrant street that gives you a glimpse into authentic Algiers life.

Lined by trees, and characterized by its Parisian Haussmann-style architecture, this street is excellent for people watching on a lazy day, while enjoying a freshly brewed cup of coffee.

Tales of architecture in Algiers

Built in 1097, the Great Mosque of Algiers is the city’s most ancient mosque and one of the few remaining places in the world to feast your eyes upon Almoravid architecture. Located in the ancient Casbah, the mosque was built under sultan Ali ibn Yusuf and features a gorgeous courtyard, a prayer hall with 11 naves, an 18th-century mihrab and 14th-century minarets.

Go back in time: Algiers’ museums

Algiers’ museums will give you a glimpse into the city’s turbulently fascinating history. The Bardo Museum, which doubles as an architectural landmark, is an absolute must-see. Located in a magnificent, restored Turkish mansion, it houses some of Algeria’s most stunning artefacts. The National Museum of Antiquities really transports you back in time, as it displays a vast array of ancient relics that guide you through the country’s fascinating times.

Stop and smell the flowers

The Botanical Garden of Hamma is a gorgeous garden located in the Mohamed Belouizdad district. The garden is considered to be one of the world’s most important botanical gardens. The Garden sits side by side with the zoo and the Algerian National Library, separated by the road from the Museum of Fine Arts and the Martyr’s Maqam. It can be easily reached by metro, bus or car. 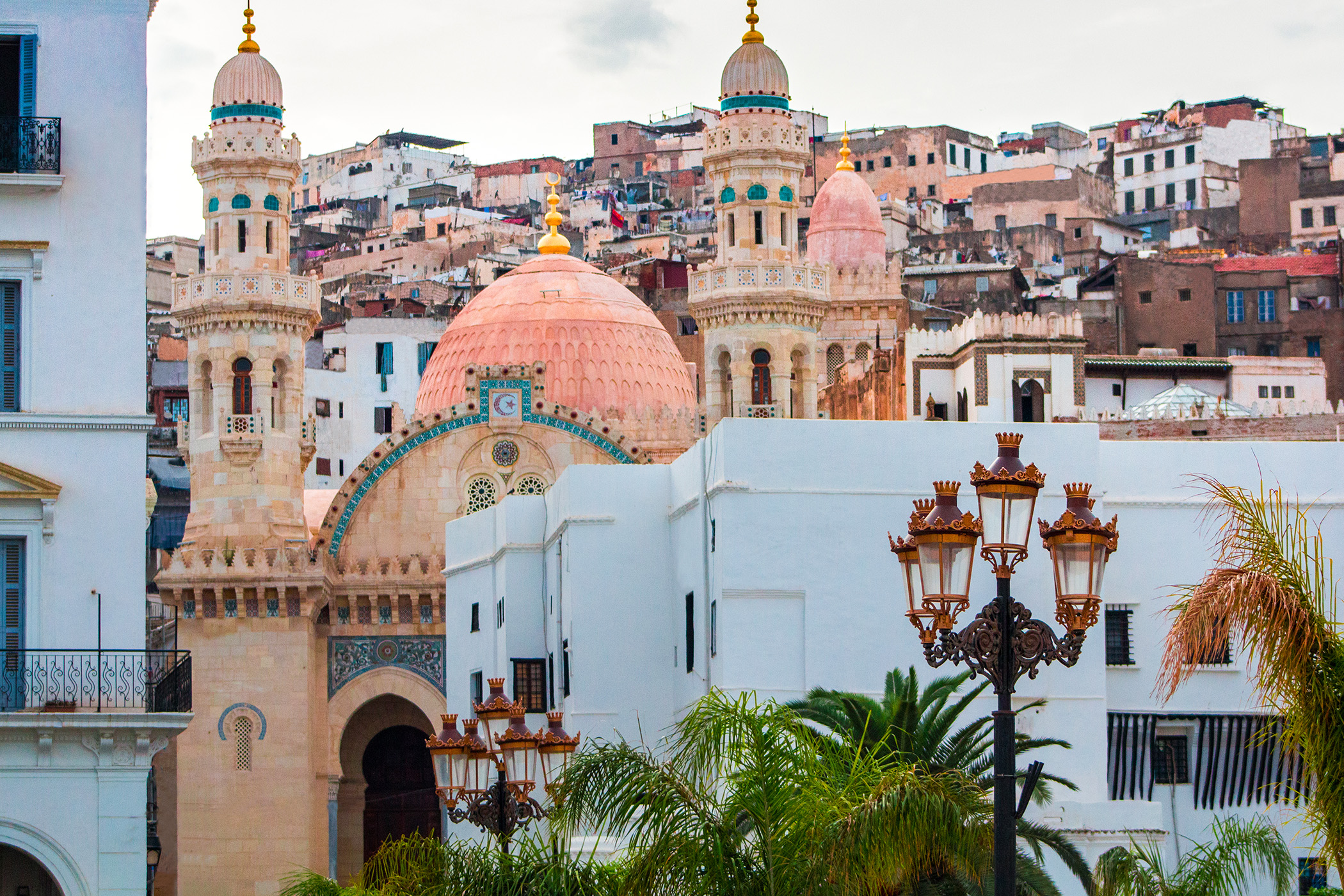 Seek refuge by the sea

Just outside of the city are some stunning seaside resorts that are great for escaping the heat and taking a break from the wonderfully chaotic capital. The coastal town of Sidi Fredj is a particularly cherished resort, located on a peninsula around 30 kilometers outside of Algiers. It is an aesthetically pleasing town with beautiful architecture, a harbor and sandy beaches.

Take a culinary ride through history

Although the Algerian twist on many beloved Mediterranean and Middle Eastern dishes such as shaksouka, stuffed wine leaves and molokhiye should not be missed, why not focus on the dishes that are unique to this country, due to the fusion of the many different ethnicities that make up its past and present, such as the vegetable stew tabikha khudrat, the potato fritter snack makhouda and the diamond-shaped pastry makroudh.

Discover Algerian cuisine by stepping inside the kitchen. We offer you a unique experience in Algiers — a cooking class packed with flavour, where recipes faithful to the culinary traditions of Algeria will be celebrated. · Learn more and book online.

For all its breathtaking bravado, impressive ruins and comforting cuisine, it’s undeniably the Algerians themselves, who welcome visitors with such openness and genuine curiosity, that are the real highlight of a visit to this city.

For an unforgettable adventure and a highly enriching multicultural odyssey, head to Algiers.

Feel free to get in touch with us if you have any questions.

Algeria has immensely improved in safety in recent years and for much of the country there are no significant safety issues, with Algiers being considered safe for foreign visitors. However, the lack of foreign visitors means that you will stand out in a crowd and so it still pays to exercise caution. It is always worth investing in a guide as their expertise will inarguably add an invaluable layer to your stay, both on a practical and a more profound level.

The currency in Algeria is Algerian dinar (DZD). ATMs are available in Algiers and Visa and MasterCard are usually accepted. Euros or US dollars can be easily exchanged at reasonable rates which often cheaper than withdrawing cash from ATMs.

Sim cards with a 4G connection are easily available at the airport, although you’ll usually have access to 3G in Algiers.

Farah was born and raised in The Netherlands to a Lebanese father and an Italian mother. Having become formally fluent in film in Bologna, she majored in Media & Cultural studies at the University of Amsterdam. After honing her skills as a journalist at The Daily Star Lebanon, Dutch radio and Belgian television, her friends and family bullied her into pursuing a career as a modern-day hakawati-cum-writer. As a freelance journalist, she seeks to illuminate the myriad tiny stories that make up the fabric of society. Farah enjoys learning about Lebanese culture through Seinfeldesque taxi drivers, being told off in French by immaculately dressed tetas and drowning in the comforting cacophony of colours, sounds and scents that is Beirut.